I had intended to chronicle my experience as a performer as I went. Show by show, I was going to bring readers along on my journey. As it turns out, I am not great at keeping up with that plan. So here I am, two years into my journey as a burlesque performer, just off my first out of town festivals, making schedules for months in advance, and trying to hustle with a rhinestone business to fund my new creations and travels.

I recently posted to facebook a year by year photoset from 2013 to 2017. I feel as though in some ways I haven’t changed much. My life has changed quite a lot since then, especially in comparison to early 2013. 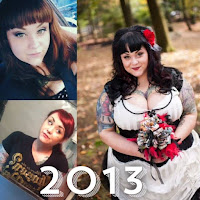 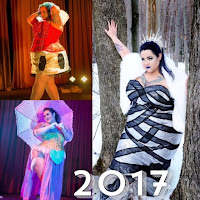 Ohhhh 2013. That was the year I bought a house and got married. My stress levels from having both those things happening simultaneously was through the roof. I know my old coworkers can attest to how loopy I was through that whole period. Going into that year I was convinced I would be able to keep it together, stay laid back. I did not, not at all. But anywaaaaay, that year was also the year I changed muggle jobs and really began feeling like a competent grownup human. Between everything, 2013 was definitely my biggest step into full-blown adulting.

But something was missing.

All of my adult life I have struggled to satisfy the creative beast that lurks in the corridors of my soul. Early on I made a commitment to prioritize education and a traditional path to create some realm of stability and comfort when it came to taking care of my family. I’ve always known I would need to, at the very least to be capable of, head my household, regardless of who that household contained. So throughout my twenties, I focused on my studies and finding steady, gainful employment. While those small successes I was able to find did give me a sense of accomplishment, the weight on me imposed by the lack of a creative outlet made me feel like a husk of a human being. I dabbled in some things, but I could not get myself to consistently create, especially in a situation where I would be alone in trying to do so.

I found my way to burlesque in strange way.

Back somewhere around 2008 I had seen an episode of Wife Swap that featured Ravenna Black, a burlesque dancer in Seattle. It intrigued me, but seemed unrealistic for me, with my then situation as a consistently broke 24 year old student and mom, with body hangups, living in a fairly conservative region. My thoughts held me back, as they often do. Was there anything even like that around here? I don’t think they’d accept me even if there was.

Fast forward to 2014. I had been living in Ohio for a while, and my very occasional outings to the local gay bars were my big outlet for socialization. I very often drunkenly and with some consistency, would run into one young fellow at these bars. He reminded me of a friend from high school, and boozed-up-me decided we should be friends. Because of this wonderful human who I can now actually call a friend, I found my way to the Cleveland Burlesque scene and enrolled in a class with Cleveland Burlesque Academy. I had no idea how much of an impact this would have on my world going forward.

Originally I had no intention of performing publicly. I just wanted to take a dance class. But over the months of classes and learning that maybe this would be a good fit for my ever-looming need for a creative outlet, performing became the end goal. 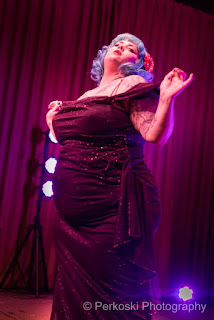 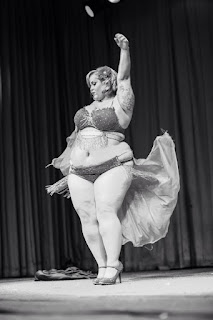 The first time I hit the stage, I was an emotional wreck. I held to together beforehand and gave it my all when I stepped out there to perform. I’ve had some newbie performers be surprised when I share how nervous I was (and still sometimes am), and even some people who were there for the show didn’t see how awkward, panicky, and disoriented I felt while on stage. My nerves apparently didn’t show as much as I thought, and I made it out alive. Of course, once I stepped off stage and hit the little backstage area, I went into full anxiety meltdown.

Honestly, the first few times I put myself on that stage, it was a struggle, but I am glad I did it and for all the incredible experiences I’ve had. I think that's where I will leave it for now.

I promise to try my best to keep consistently updating here so you can come along on this journey with me. <3
Noella DeVille at 1:08 PM
Share